Are you planning to “do the MIPS minimum” -  the “Test” reporting option - in 2017 and submit the minimum amount of data possible to avoid the penalty?  Perhaps every silver lining does not have a cloud, but “Pick Your Pace” sure does.  Just as we cheered when the SGR was buried, only to see MIPS emerge from the grave, perhaps the “Pick Your Pace” regulations should undergo more scrutiny before we throw our hats into the air at this regulatory “reprieve.”

Practices that do the MIPS minimum settle for a 0.5% positive fee adjustment for the first year that the MIPS payment adjustments are in effect. Going forward, performing at the threshold will doom these practices to a fee schedule FREEZE for the following 6 YEARS. 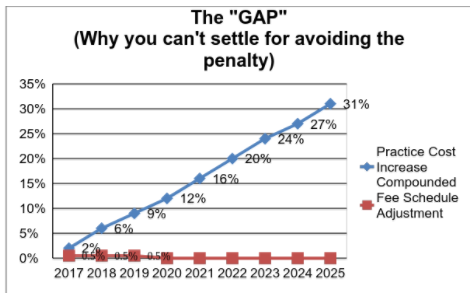 This is simply a path to destruction for most practices.  Your only REAL option, outside of engaging in an AAPM, is to work to increase your MIPS score.  Practices that start NOW in 2017 will be well ahead of those who have settled for no penalty.  And by performance year 2019, the transition years may well be over; there may well be no way to “do the minimum” – by then everyone who falls below the median could receive a cut!

You still have time to succeed!

Don’t just sit 2017 out.  Report for 90 days and strive for the highest MIPS score you can.  Earn a positive fee adjustment and prepare your practice for maximum success.  Remember, it’s not just your Medicare revenue at stake. Your MIPS performance will be publicly reported on the Physician Compare website for all your patients – and payers – to see. Who will look more attractive – a physician with a score of “3” or those with scores of 70 or higher? And increasingly, commercial payers are incorporating the same types of performance scores in their payment systems. Learn what your practice strengths and weaknesses are in the “pay for value” world while you still can without fearing a penalty!

MIPS "Winners" can do well

It is very challenging to show a graphic display of the impact of doing well in MIPS, as there are so many variables in both the rules and how MIPS eligible clinicians will actually perform.  But it is clear that the economic forces behind creating MIPS will not be changed and it would be wise to prepare for full implementation for the third performance year - 2019. 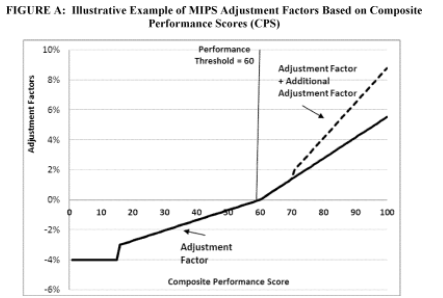 Look at Figure A, the example CMS provides in the proposed 2018 regulations of the difference between a practice that settles for the threshold (avoids the penalty) and a practice that goes all out and does well.  Practices that try will likely fall somewhere between the threshold and this example of best performance, with most far outstripping the increase in practice expense.  Where do you wish to be?

Early-adopters did well in the Value-Based Modifier program

Medicine’s experience with the Value Modifier (VM) is informative.  The VM was phased in in 2013 (physician groups of 100+) and sunsetted in 2016 (all physicians).   The results have been strikingly consistent.  As in prior years, a tiny fraction in 2017 (1%) received bonuses ranging from 15% to a whopping 77% of their Medicare fee for service revenue while the majority (63% in 2017) had no VM adjustment) and 36% received a penalty of 2-4%. Thus, “losers” have vastly outnumbered the “winners,” resulting in a transfer of Medicare revenue from roughly a third of the VM eligible clinicians to a few “winners” who have had enormous positive fee adjustments.  The huge middle ground of practices get only the fee adjustment set by law (0.5% for 2015 through 2019), lagging practice cost inflation by significant amounts.

MIPS Success is much more important than VM success

The MIPS program “Pick Your Pace” poses a dilemma for physicians which is even more challenging than that presented by the Value Modifier.  In the transition years, 2017 and 2018, it is quite easy to score at the threshold and avoid any penalty.  But doing so dooms those physicians to the .5% update in 2019 and a freeze of their fee schedule in 2020. Even more troubling is that this delay will make it increasingly difficult for these practices to become MIPS “winners” as they will have lost two years of MIPS experience. Indeed, by “doing the minimum”, they are essentially letting those MIPS eligible clinicians who engage now “lap” them twice. Realistically, will they ever be able to catch up? Certainly, those physicians who participated in the VM program right from the beginning did much better than those who waited.

Remember, MIPS does not have “cliff” scoring of 1 standard deviation above or below as was used in the VM system. Because MIPS will use a scaled penalty or bonus based on performance once we are past these “transition years”, the huge band of “neutral adjustment” in the VM will no longer exist; only those MIPS Eligible Clinicians who score exactly at the threshold set by regulation will have a neutral adjustment.  Those above the threshold start to earn positive fee schedule adjustments while those below the threshold start to earn negative fee schedule adjustments. Slow starters may be doomed to the penalty box in the lower half of the pack!

The stakes for both winners and losers are also high.  Those in the bottom quartile of performance below the threshold drop immediately to the maximum negative adjustment for that year (4% in 2019 increasing to 9% by 2022).  On the upside, those who score at or above the 25th percentile above the threshold and become eligible for the “exceptional performance” bonus – an additional $500 million to be distributed to those who earn it.  With stakes this high – is it really wise to sit out these years when you can train without fear of failure?

The Solution....The MIPS Navigator™ sponsored by

The MIPS Navigator™ is an online tool that makes it possible for individual clinicians or practice administrators to quickly and easily sort through the various MIPS alternatives and produce a practice specific “2017 MIPS Itinerary/Plan” for each of the 3 MIPS domains that will maximize their likely MIPS success.

By answering a few questions specific to your practice, the MIPS Navigator™ will let you determine:

Please go to our website at https://mips.qvhsystems.com/mips/FAC and click on the MIPS Navigator icon to access this fantastic tool and increase your potential MIPS bonus today!